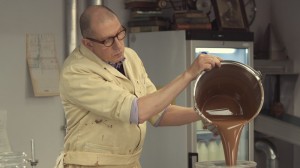 The fifth and latest in the current series of Cadbury Dairy Milk TV commercials which began with Gorilla debuts on TV3 at 7.45pm tonight. Called Chocolate Charmer, the 60-second spot is somewhat reminiscent of Roald Dahl’s children’s fairytale Willy Wonka as it shows how Dairy Milk bars magically come about.

Towers of chocolate and milk are created out of spinning glass bowls, orchestrated by levers and pulleys and a little magic. Fallon London created the campaign, Carat handles media, Ogilvy One looks after various below the line activities and MCSquared at Murray Consultants is the PR agency.

Apart from Gorilla, the other three commercials in the Cadbury’s Dairy Milk series were Airport Trucks, Eyebrows and Zingolo. Gorilla featured an ape playing the drums to the Phil Collins’ track ‘In the Air Tonight’. The sequel, Airport Trucks, used the Queen hit ‘Don’t Stop Me Now’.

Remakes of Gorilla and Airport Trucks went out with Bonnie Tyler’s ‘Total Eclipse of the Heart’ and Bon Jovi’s ‘Livin’ on a Prayer’ during the final of Big Brother 2008. Zingolo with Ghanaian musician Tinny highlighted Dairy Milk’s Fairtrade mark and a make-belief record label.

The screening of Airport Trucks was unfortunate as it coincided with the baggage handling problems at the new Terminal 5 in London Heathrow. The commercial showed suitcases scattered across the runaway.