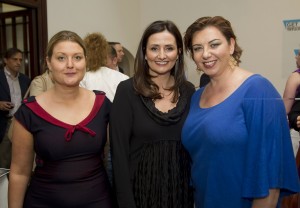 Annette Ni Dháthlaoi has been appointed to the new position of head of marketing at US-owned Liberty Insurance. Ni Dháthlaoi (pictured centre) has considerable marketing experience. Her most recent position was as head of insight at Kerry Foods, where she was responsible for identifying sources of future commercial growth by gaining consumer insight for the group’s Low-Low dairy and Dennys meats brands.

Ni Dháthlaoi’s background is in brand and portfolio management, strategic planning and research. She started her career with Nestlé confectionery, working on brands such as Kit Kat, Aero, Munchies, Toffee Crisp, Quality Street and After Eight. She then joined Glanbia as senior brand manager for Avonmore. She moved to Unilever in 1999, where she managed various food brands, including Hellmann’s and Ambrosia.

She then assumed the role of marketing manager for Lyons Tea. In 2006, following a project to successfully rationalise the customer portfolio at An Post, she joined Heineken Ireland. She launched a range of specialty beers to the Irish market, including Sol and Paulaner. She also spearheaded a research initiative on bottled beer which revealed insight that helped inform Heineken’s European brand strategy.

She moved to the ESB three years ago. During her stay there, she was part of the team that implemented the new Electric Ireland identity and the launch of competitive electricity and gas offerings to commercial and residential markets.  She recently became a board member of the Marketing Society.

Liberty’s parent is the sixth biggest US insurer. The company recently agreed a major one-year deal with RTE to sponsor the Late Late Show from the start of the new season. It appointed Rothco to handle its advertising at the start of the year. Its PR is managed by Brendan Murphy at Teneo Strategy, part of the group run by former US economic envoy Declan Kelly. Bill Clinton and Tony Blair are Teneo directors.