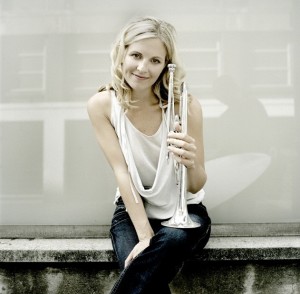 Award-winning British trumpeter Alison Balsom will perform at the National Concert Hall as part of next month’s international concert series. Balsom won female artist of the year for the second time at last year’s Classic Brit Awards 2011. Balsom will perform a programme of works by Haydn, Elgar and Seraph for trumpet and strings by James MacMillan, which was composed especially for her. She will be accompanied by one of Europe’s most highly acclaimed chamber orchestras, Kammerorchester Basel.

Her recording of Seraph for EMI Classics earned her another nomination for female artist of the year at the Classic Brit Awards at the Royal Albert Hall on Tuesday. This month sees the release of her latest recording for EMI ‘Sound the Trumpet –Royal Music of Purcell and Handel’ with the English Concert and Trevor Pinnock.

Described by Philadelphia Inquirer as “the kind of artist who redefines what her instrument can do”, Balsom has established an international reputation as one of classical music’s great ambassadors and is ranked among the most distinctive and ground-breaking musicians on the international circuit. She has also been honoured with numerous awards by Classic FM, Gramophone and Echo Klassik.

Balsom was in China to perform with Lorin Maazel and the National Symphony Orchestra in the nationally televised New Year gala event in Beijing. She was a concerto finalist in the BBC Young Musician competition in 1998 and won the Feeling Musique Prize for quality of sound in the 4th Maurice André trumpet competition.

Balsom will perform at the NCH at 8pm on Thursday, November 8.