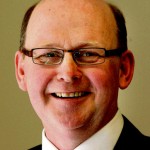 Kevin O’Sullivan has replaced Geraldine Kennedy as editor of The Irish Times. He was been news editor since 2006 and also served as night editor, special projects editor, editor of the paper’s Health supplement and environmental and food science correspondent. As editor, he joins the company board.

O’Sullivan, 51, is a native of Tramore, Co Waterford. He graduated with a BSc from UCD in 1981 and a diploma in journalism from DCU in 1983. He joined The Irish Times in 1997, having worked with the Connact Tribune and the Tuam Herald. He is married to Ger and has two sons and a daughter.

The other two final contenders for the job of editor were staffers Paul O’Neill and Denis Staunton.