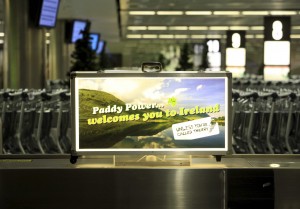 Paddy Power has launched a tongue-in-cheek campaign centred around the Thierry Henry handball controversy which targets overseas visitors as they arrive into Dublin airport. The campaign sees the bookmaker take over the baggage hall in the airport’s arrivals area with 42 illuminated posters.

The ads, which welcome visitors to “beautiful Ireland”  with the exception of people named Thierry, will run over the next fortnight. A spokesman said it was “refreshing” to be able poke some fun back in Henry’s direction.

He added that it was a safe bet that the Barcelona striker will not be travelling through Dublin Airport anytime soon but if he does, the ads will be there. The creative was the work of The Hive with media booked direct.