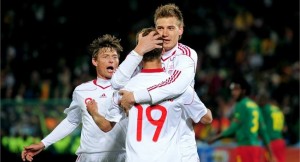 Paddy Power has paid the €100,000 fine imposed by Uefa on Denmark striker Nicklas Bendtner for revealing a pair of green boxer shorts with the bookmaker’s logo during Denmark’s Euro 2012 game against Portugal. They said they were paying the fine in reaction to social media comments. The penalty by Uefa sparked a debate yesterday with both Rio Ferdinand and Gary Lineker expressing their surprise at the severity of Bendtner’s punishment, particularly when compared to other recent UEFA fines, the bookie said.

Paddy Power said it was “inundated” with social media messages suggesting they pick up the tab for ‘pants-gate’.  In response, the bookie announced on Twitter today their intention to pay the fine.  A spokesperson said the Arsenal striker, who was on loan to Sunderland last season, should not suffer as a result of Uefa’s “double standards”.  They said he should not be penalised for nothing more serious than “a bit of fun.”

Bendtner was also hit with a one-match competitive ban.