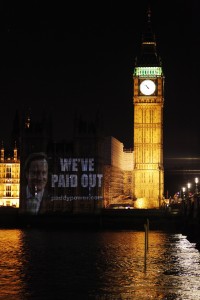 Paddy Power claims the British general election is done and dusted before a vote has been cast and the bookie is so sure that David Cameron’s Conservatives are home and dry that they are paying out on all bets on Cameron to be prime minister and the Tories to win the most seats.

The early payout was announced in the early hours of this morning by illuminating one side of the Westminster Houses of Parliament with Cameron’s image and the words “We’ve paid out”.

Cameron’s strong performance in the final TV debate on Thursday saw a relentless tide of betting support for the Conservatives, shortening the odds on the Tories winning the election.

Last week’s election odds of 1/5  were slashed to 1/16 and punters may collect over €100,000 from Paddy Power. But all might not yet be in vain for Nick Clegg and Gordon Brown.

In 2003, Paddy Power paid out early on Arsenal winning the Premier League, only to see Man United pip them. The question now is, by how great a margin will the Conservatives win?