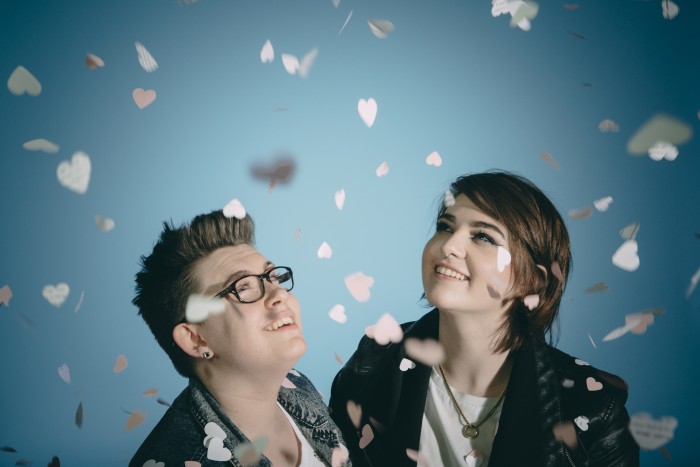 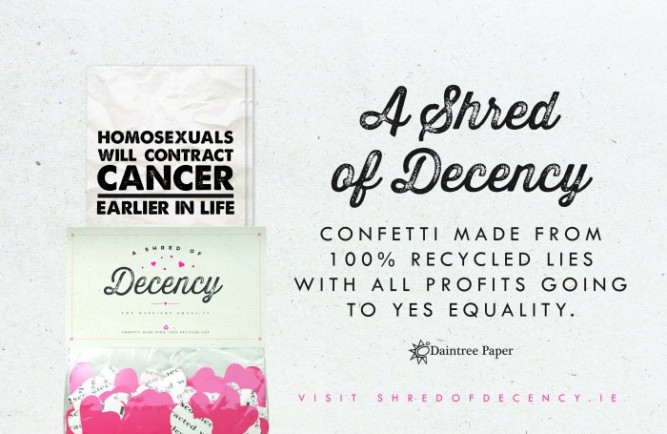 As the nation prepares to vote in next month’s referendum on whether or not Ireland should legalise same-sex marriage, various agencies are undertaking campaigns. Jamie White’s Youth Nation rolled out a viral with staff talking to camera about their sexuality and why most young people in Ireland believe marriage equality to be a God-given civil right.

Irked by some of the No campaign messages, Rothco and Daintree Paper put their heads together and came up with a concept called A Shred of Decency – confetti made from what they claim are “100% recycled lies”. The confetti comes from shredded No campaign flyers, leaflets and online messages, collected and recycled into “something positive”.

For this week’s launch, packs of confetti are being sent to “key social influencers”, urging them to take a photo with their friends and partners celebrating marriage equality. They are asked to post the fun photos on Instagram and Twitter using the shredofdecency hashtag.

Rothco’s executive creative director for the project was Alan Kelly, with Shane O’Brien as copywriter and Stephen Rogers art director. The production company was Piranha Bar. All profits from the campaign go towards supporting the Yes side in the referendum. “If we raise enough money, hopefully lots of couples will finally be able to get married,” Byrne says.

A Shred of Decency will run online until referendum polling day on Friday, May 22.

Rothco are no strangers to filmmaking, having developed a documentary called The Toughest Trade for AIB. Broadcast recently on TV3, the show tied in with the bank’s sponsorship of the GAA Club Championships. It followed a narrative similar to Wife Swap, where professional sports stars trade places with amateur GAA players.