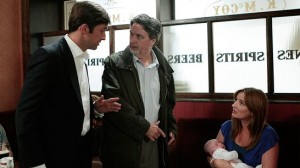 RTE Television and BWG Foods have agreed a €900,000, three-year product placement deal which sees Christy Phelan’s corner shop in Fair City transform into a Spar store. The deal will give the Spar brand exposure to about 500,000 soap viewers four times a week.  Suzanne Weldon, marketing and communications director, BWG Foods, said they plan to maximise activity through its nationwide network of 450 retailers.

Spar’s on-screen ‘store launch’ will occur in the episode due to be broadcast on Tuesday, December 6. Gerry McGuinness of RTE Sponsorship said the deal for the fictional Carrigstown community marks the national broadcaster’s first high profile product placement deal. TV3 recently secured a €250,000-a-year deal with Kraft Foods for its Kenco coffee on the Morning Show and Midday weekday chat shows.