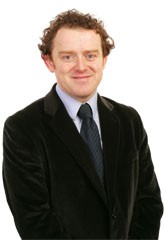 Simon Carswell, business journalist with The Irish Times, was presented with the nationalist journalist of the year award at the first National Newspapers of Ireland (NNI) Journalism Awards in the Four Seasons hotel. Carswell was honoured for his series of reports on the financial crisis, including an exclusive interview with Anglo chief David Drumm and an article on how the bank guarantee came about.

The honour was one of 13 jounalistic awards presented across a range of categories, along with a special award made to former Irish Times editor Geraldine Kennedy for her outstanding contribution to Ireland’s newspaper industry. The full list of NNI Journalism Awards winners were as follows…

National Journalist of the Year – Simon Carswell, The Irish Times

Feature Writer of the Year – Kathy Sheridan, The Irish Times

Political Journalist of the Year – Miriam Lord, The Irish Times

The awards were presented by NNI chairman and Independent Star managing director Paul Cooke and chairman of the judging panel Michael Brophy of Independent News & Media.