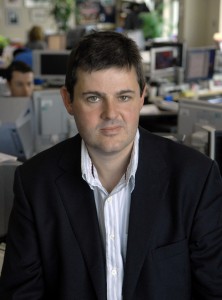 RTÉ has appointed Kevin Bakhurst as managing director of news and current affairs. He has been deputy head of the BBC Newsroom since 2010, overseeing BBC TV News, Radio News and the BBC News website. He helped create the BBC Multimedia newsroom and the BBC News move to central London.

Bakhurst was controller of the BBC News Channel since December 2005. During his time as editor of the BBC Ten O’Clock News between 2003 and 2005, the programme won a BAFTA for its coverage of the Madrid bombing and a Royal Television Society Award for news programme of the year.

The programme also won an RTS News Event award for its coverage of Darfur and a second BAFTA for the July 7 bombings in London. He worked in the field for BBC News, including the 9/11 attack, the inauguration of President Obama, US Presidential elections, the Paris Concorde crash and the 1997 Hong Kong handover.

He is also a member of the BBC’s London 2012 Olympics management team and on the BBC director general’s leadership group. Born in Barnet in North London, he went to Haberdashers’ Aske’s in Elstree and studied modern languages at St John’s College, Cambridge. He joins RTE in early September.