Santa Rita Chilean wine is the sponsor of the Matt Weiner’s fifth season of Mad Men, which starts this Friday at 10pm on RTE 2. The sponsorship will run for 13 weeks and centres on four intro and outro stings that reflect the New York lifestyle of the 1960’s. Each sting carries a tagline to reflect a specific varietal of Santa Rita wine and will include iconic items relevant to the late 1960’s, such as a typewriter, a wireless and a starburst clock.

Set in New York agency Sterling Cooper Draper Pryce, Mad Men has won a host of awards including an Emmy for outstanding drama series four years running from 2008. Santa Rita’s ties with the series is part of a marketing campaign aimed at promoting the Santa Rita range. Ireland is the brand’s second biggest export market after the US, accounting for three million bottles and €30 million in retail sales. 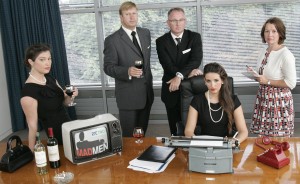