€83m in half year press spend

Advertising spend with national newspapers amounted to €83 million for the first six months of the year, the National Newspapers of Ireland (NNI). The total reflects a ten per cent drop on the same period last year. Media agencies accounted for €53m, with the rest of the spend coming from direct advertisers. WPP’s Mindshare topped the spend league with over €5m for the half year. Core Media’s Starcom came second with €4.2m.

The NNI report shows that Mediacom was third with €4.1m, followed by Carat on €4m and its two sister agencies in Aegis, Brindley and Vizeum, on €3.8m and €3.5m respectively. The top ten was completed by OMD Ireland, on almost €3m; MediaVest, €2.6m; Initiative, €1.7m and Mediaworks/Owens DDB, €1.4m.

Maxus Communications, recorded the highest percentage increase, up 48 per cent to €613,000. 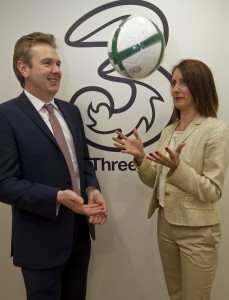 Stephen Rae, editor, Evening Herald, and Elaine Carey, sales and marketing director, Three, at a photocall to announce the mobile operator’s sponsorship of the Herald’s Striker junior and schoolboy football magazine. Herald readers have the chance to win €10,000 for a club of their choice during September.