Six Nations worth over €30m 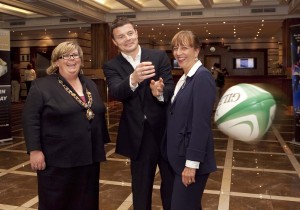 Ireland’s two home Six Nations matches at the Aviva Stadium could generate over  €30 million for the national economy, the Dublin Chamber of Commerce says. The matches between England and France will attract 16,000 away fans. Ireland’s first match is against England this Sunday, while Ireland v France is on March 9. Dublin Chamber chief executive Gina Quin said sports tourism has become big business.

Dublin’s hospitality sector relies on major events, from the Six Nations and Heineken Cup, to concerts and festivals. While businesses closest to the city centre benefit most from increased sales during match weeks, corporate hospitality businesses in the nearby counties of Kildare, Wicklow and Meath also report a boost.

Sports tourism accounts for about ten per cent of the €440 billion international tourism market.  Sporting events represent 19 per cent of the planned Gathering events this year. The Heineken Cup final being played at the Aviva in May could generate up to €18m from travelling fans, depends on which club teams make the final.