Unilever will send a person into space as a promo for its new Lynx Apollo range. The outdoor ads mark a media first in Ireland with streetskins branded shop rollers running in Dublin along with other traditional formats. The ads direct consumers to the Lynx website where they can enter a competition.The 200 entrants with the most votes will attend the Lynx space academy with four winners going to space camp in Florida.

One winner will then be chosen to be launched into space.

The campaign includes Lynx interactive digital bus shelters in Dublin’s Georges Street, Dorset Street and Lower Rathmines. The sites feature a camera allowing users to have their picture taken. Their photo is then shown on the digital creative of a spaceman and a short video of their would-be experience as an astronaut is played. Users are directed to the brand’s Facebook page showing photos of people from Ireland and the UK. 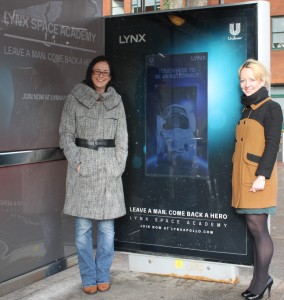 Interactive digital cinema six sheets are running in Liffey Valley, Blanchardstown and Cork, targeting Lynx’s market of 15 -24 year old males. Due to the prize on offer, the campaign is running over three cycles. Mixtape Marketing created the interactive formats, with Mindshare handling media and Kinetic the planning. Pictured alongside one of the Lynx interactive bus shelters are Susan Murtagh, Kinetic and Emma Daly, Mindshare.