January was a tough month for most businesses and to a large extent TV audiences were no exception with viewing on terrestrial stations significantly down year-on-year and revenue falling by seven per cent. The decline in impacts for January was worse for stations unable to deliver campaign ratings, Carat reports.

RTE saw a decrease in multi-channel adults by 12 per cent year-on-year, with other audiences facing even worse declines. Both multi-channel males and adults aged 15-34 were the toughest to reach with impacts down by 25 per cent. TV3 also saw impacts decrease but at at a lesser extent than RTE. 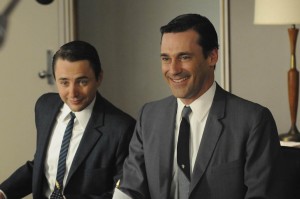 Reason to be cheerful: Season five of Mad Men is on Sky Atlantic from March 27

Sky was an exception, with some audiences seeing double digit impact increases. Multi-channel adults increased by eight points year-on-year. Sky’s share is also on the increase for the main audiences, mainly at RTE’s expense. For RTE to manage their inventory, they have been releasing short-term prices each month.

The car category was extremely heavy in January and February and was hit with a 30 per cent premium. Both months are subject to a similar premium for any late bookings. Meanwhile, UPC is adding the RTE One +1 timeshift option, RTE Two HD and RTE jr Saorview channels to its digital service from today.

Sky’s sales and marketing director Mark Anderson is interviewed in the March issue of Marketing.ie