BSkyB is on the brink of appointing a creative agency for Ireland after a series of pitches. The British satcaster has seen presentations in Dublin and London. Among the local agencies which pitched are Boys and Girls, Cawley NeaTBWA, Chemistry and Ogilvy. It is understood the latter two agencies have been shortlisted. Recently-appointed Sky Ireland boss JD Buckley worked with Boys and Girls while at Denis O’Brien’s Digicel. 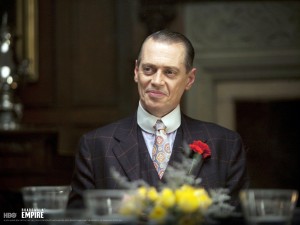 Steve Buscemi in Boardwalk Empire, one of the HBO series for which Sky Atlantic has exclusive rights

Cawley NeaTBWA used to handle RTE until it moved to Publicis. Chemistry has been engaged by Sky Ireland in recent months to work on the digital switchover. DDFH&B-JWT created a major Sky campaign with George Hook some years back where the Newstalk presenter and RTE rugby analyst extolled the virtues of Sky Plus.

Sky Ireland may soon provide telephone and broadband services. Such a move would allow Sky Ireland offer its subscribers bundled triple play services for the first time. DDFH&B-JWT is the Eircom agency, while McCann Erickson handles 3 mobile and Meteor is at Rothco. Vodafone and 02 are with London agencies.

Elsewhere in adland, Unilever and Johnson & Johnson accounts are out to pitch. Mindshare and Vizeum are the respective incumbents. Keith Murray has resigned as a director of Language advertising and design.