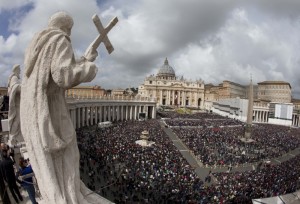 For the first time in history, Sky will broadcast the canonisation of Pope John XXIII and Pope John Paul II, presided over by Pope Francis live from St Peter’s Square in Rome on Sky 3D and Sky Arts from 8.30am on Sunday, April 27. The ceremony will be broadcast in full, without ad breaks. The Mass is due to start at 9am.

Sky will have 13 state-of-the-art 3D cameras as half a million people congregate in St Peter’s Square. The ceremony will also be beamed into 80 cinemas across Europe, offering free tickets to audiences. A special screening will be held at Sotto il Monte, the village in Bergamo which was the Pope John XXIII’s birthplace.

Coverage will be hosted by Sky News presenters Colin Brazier and Alastair Bruce.