ption:
6/3/11***NO REPRO FEE***MC for the night Jennifer Maguire pictured with judges Teresa Murray,Nick Presley ,Alvaro Ales and Joan Tallon as the judges deliberate on the APMC (Association of Promotional Marketing Consultants) Star awards which will be held in the Radisson Blu Golden lane on 8th April Pic:Marc O’SullivanThe judges and entries shortlist for this year’s Star promotions awards organised by the Association of Promotional Marketing Consultants (APMC) have been announced. The judges comprise Teresa Murray, TV3 and Joan Tallon of Bossanova graphic design, along with two judges from overseas agencies, Nick Presley and Alvaro Ales.

The shortlist and judges for this year’s Star awards organised by the Association of Promotional Marketing Consultants (APMC) have been announced. Among the shortlist are Cawley NeaTBWA for Audi, Leo Burnett for Kellogg’s, Ogilvy One for Heinz, Bespoke with Direction for Unilever and Publicis D for Renault. 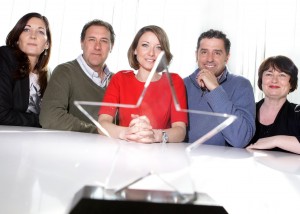 MC Jennifer Maguire, centre, best known for her part in the UK version of The Apprentice, is pictured with the judges, Teresa Murray, TV3 and Joan Tallon, Bossanova and Nick Presley and Alvaro Ales from overseas. The awards gala dinner will be in the Radisson Blu hotel in Golden Lane in Dublin on Friday, April 8th.