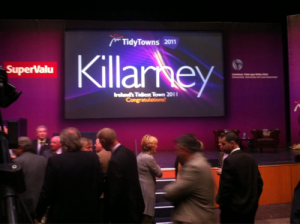 Following a public tender process, Musgrave, the Cork-based group, which owns the SuperValu independent grocery chain, has agreed a new four-year TidyTowns sponsorship contract with the Department of the Environment, Community and Local Government. Although no details on the new SuperValu contract were disclosed, the last deal was put at around €500,000 a year. The new contract runs until 2016.

TidyTowns allows its sponsor an opportunity to target communities throughout the country. The competition saw a record 821 entries last year. As well as the brand values the TidyTowns’ sponsorship delivers, the competition attracts considerable national and local media coverage. Last year’s awards ceremony was held in the Helix Theatre in September and featured on RTÉ’s Nationwide early evening show.

SuperValu has sponsored TidyTowns for 20 years during which time it has become synonymous with the event. Last year’s overall winner was Killarney, Co Kerry, which also won the tidiest large town. Kilkenny was voted the country’s tidiest large urban centre. Lismore in Co Waterford was named the tidiest small town and Emly, in south Tipperary, the tidiest village. The winners were awarded over €200,000 in prizemoney.

Musgrave launched the SuperValu own brand range recently. Simply called the SuperValu Range, it includes over 1,500 products and represents a €20 million investment. Goods are priced on average a third less than the brand equivalent. Consumers can cut  €45.26 off a shopping basket normally costing €110.35.

SuperValu advertising is handled by DDFH&B-JWT, with media by Starcom. PR is with Edelman.