An Taoiseach Enda Kenny officially opened The Jelly Bean Factory’s extended confectionery factory in Dublin today. The state-of-the-art production line will produce a new range of gourmet Belgian chocolate coated jelly beans.  The new facility will see the creation of 25 new jobs and nearly doubles the company’s manufacturing footprint to over 90,000 sq ft. The taoiseach joined invited guests from the IDA, Enterprise Ireland, Bord Bia and the Irish Exporters Association at the IDA Business and Technology Park in Blanchardstown.

Speaking at the launch, the taoiseach said Ireland’s economy recovery is being led by Irish exporters. The Jelly Bean Factory is one of Ireland’s success stories, exporting 97 per cent of its product to over 55 countries worldwide and contributing to Ireland’s growing global reputation as a provider of high quality food and drink products. The confectionery market in Europe is currently estimated to be worth €43.7 billion. 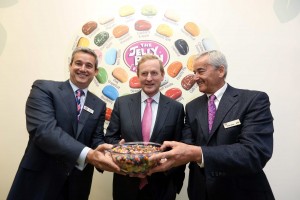 In 1988, company founders, father and son Peter and Richard Cullen, identified a niche in the European confectionery market for gourmet jelly beans. Today, Aran Candy, trading as The Jelly Bean Factory, is the biggest producer of gourmet jelly beans in Europe, using natural flavours and added juice in its fruit flavours, with no artificial colours and which are GMO- free, gluten-free, fat-free and Kosher and Halal compliant.

Peter Cullen said he expected a 50 per cent growth in export sales in the next two years and an investment programme of €1m is planned for markets across Europe, North America, Australasia and the Middle East. Another 25 new jobs will be created to meet the growth, bringing total employment to 80 staff.

Richard Cullen said the Jelly Bean Factory was the first brand to develop gourmet jelly beans with Belgian chocolate. It took over two years to research and develop the new bean, which will be launched in all markets in time for Christmas. The company produces over 12 million jelly beans and with the new product they hope to increase the total to 15 million. It takes all of 10 days to make a chocolate bean from start to finish.