Taylor counts down switch for Sky 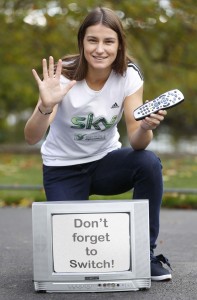 On the same day as Katie Taylor confirmed her decision to remain amateur, Sky announced that the Bray boxer is the satcaster’s ambassador for the digital switchover campaign. With the switchover going ahead next Wednesday, Sky is reminding analogue viewers who have yet to switch to digital they have little time left.

Taylor said today she’s staying amateur. “There’s nothing better than boxing for your country and no money in the world can compare to that,” Ireland’s Olympic gold medallist said. “TV plays an important role in Irish people’s lives, so I’m pleased to help Sky raise awareness of the need to switch to digital TV.”

Mark Deering, Sky Ireland’s corporate affairs director, said the company’s sales teams are seeing a big demand for Sky across the country and they expected this to continue right up to the deadline. Research by Sky Ireland shows that Graham Norton is the TV presenter people would miss most if they suddenly lost their TV.