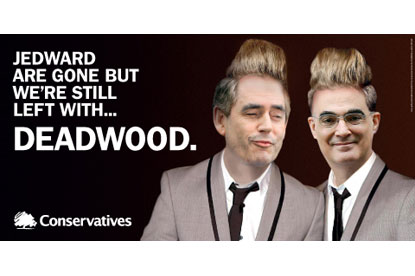 The Conservative party in the UK is running a campaign on digital poster sites around London showing prime minister Gordon Brown and chancellor of the exchequer Alistair Darling as X Factor evictees John and Edward Grimes, aka Jedward. The posters appeared within five minutes of the Lucan twins being voted off the show.

But the ‘Deadwood’ themed posters, created by Euro RSCG, have been ridiculed by Labour party activists who have accused the Tories of following their press ad idea from two weeks ago showing David Cameron and George Osborne in an almost identical pose, with the line: “You won’t be laughing if they win”.