Toscani to talk at Offset 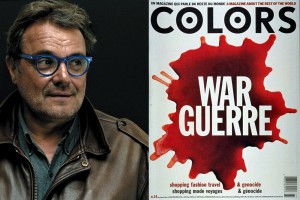 Oliviero Toscani, the photographer and designer best known for his United Colors of Benetton ads, will address the Offset creative event in Dublin next weekend. Toscani made headlines worldwide for his provocative images for the Italian clothing brand from 1982 to 2000. The Benetton campaign featured a priest and nun kissing, a man dying of Aids and a white baby being breast fed by a black woman.

The ads also featured a host of international leaders kissing, including Barack Obama and Hugo Chavez.

Toscani is known to be an incredibly passionate and a straight-talking speaker. He is one of many headline international and Irish creatives who will give talks at the Bord Gais Energy Theatre from next Friday to Sunday (April 5-7). Other overseas speakers include Iain Tait, famous for his Old Spice ads at Weiden + Kennedy. Tait is now creative director of Google Creative Labs, where his projects include Google Class.

For full details on Offset 2013 and to book tickets, go to http://iloveoffset.com/