Tubridy has worries about fame 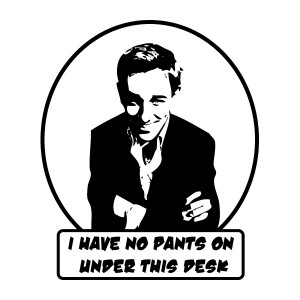 Ryan Tubridy on a new tee-shirt by Freshmilkclothing.com

RTE presenter Ryan Tubridy has admitted that he worries about the effects of his fame on his family and has described it as being “just all a bit odd”. Speaking on The Last Word with Matt Cooper on Today FM, he said he was waiting with his daughter in his car recently and school children were banging the car window. A family of four then sat down beside his car and ate their ice creams while staring at them.

Tubridy said that he worried about how all the attention affects his children. “If I’m on my own that’s fine,” Tubridy said. ” I’m well paid and I’m a big boy and I’ve a thick skin. But with your kids there, it’s a little tough on them.” Tubridy said the Late Late Show “souped up” his whole life. “It’s just a different gear the attention you get out in the pub or in a shop, it’s quite intense.”

He admitted he’s very lucky and said he can understand why people perceive him to be a “self-regarding little shit”. Last summer, pictures of him taking a stroll with his girlfriend, Aoibhin Ni Shuilleabhain, appeared in the press, much to his chagrin at the time. He thought it was “all so sneaky, unpleasant and a bit mean-spirited”.

His attitude to the paparazzi has changed since then. “After the year I’ve had, I couldn’t give a flying monkey’s about those photos,” he said. “I’ve had an intellectually challenging year, an emotionally challenging year and I think that I’ve changed and my priorities have changed.

“What gets me upset easily has changed, I care about much more important and different things than a year ago.” Tubridy believes his first season in the Late Late hot-seat went well.  “I’m not saying I did brilliantly, I’m not saying that I didn’t annoy people or it was flawless… but we did okay, the box office receipts were good.

“My attitude is that if those amounts of people are watching the show it doesn’t really matter what anyone else thinks about it be it in the papers, on radio or on TV.” Tubridy denied any problems with RTE management.

He attributed much of his success to his agent, Noel Kelly, who he thanked publicly at the TV Now awards last week after he was named Ireland’s favourite male television personality.

“He’s a smart boy he does the negotiating with bosses. When you’re dealing with the RTE authorities it makes for much more pleasant relations if I can keep my relationship with these people on a very human and friendly level and then someone else can keep a relationship with them that is a little more fraught.”

Tubridy paid tribute to his friend, RTE broadcaster Gerry Ryan, who died suddenly last month. “Throughout all my ups and down in RTE, be they personal or professional, he stood by me. He was a man of great loyalty and he loved loyalty and it’s something he’s instilled in me.”

“You are like every other person on this  island: you are vulnerable and you have your weaknesses and you have your moments. There are very few people that you can call and will say ‘I’ll look after you, I’m on your side’. He was one such person,” Tubridy told Cooper.