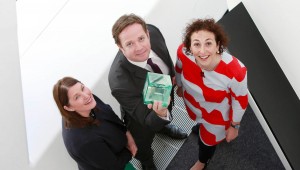 TV3 is to be the headline sponsor of the 2014 Adfx awards organised by IAPI. Taking place in the Bord Gáis Energy Theatre on Thursday, September 4, Adfx recognises and rewards the most effective advertising campaigns in Irish and international markets run in the last two years. TV3 commercial director Pat Kiely said the broadcaster will support the awards both in the lead up to the event and on the night itself.

“We will add some further theatre to the awards,” Kiely said. “Included in this will be the production of unique content for broadcast on TV3 and digital content available via TV3’s digital and social media platforms.” Tania Banotti, CEO, IAPI, said that as most Adfx entries use TV to reach consumers, it is still seen as the most effective medium and so TV3 acting as lead sponsor is “a natural fit” for the awards.

Now in its 10th year, Adfx is regarded as adland’s premier awards in proving that advertising impacts on the bottom line and offers client and agency an opportunity to be recognised for their efforts. This year, IAPI received 60 entries and so the competition to get on the shortlist will be tougher than ever. Winners on the night will be awarded with a glass trophy designed by Andy Sharkey, a third year design student at NCAD.

There are ten IAPI Adfx categories, namely FMCG, corporate, finance and services, IT/telco and digital, leisure, media an entertainment, automotive, retail and fashion, alcohol, public service, social welfare and education, new launch and small budget. The awards shortlist will be announced on @IAPI_Updates and on www.adfx.ie on June 24. For more information on the awards visit www.adfx.ie; Twitter handle: @IAPI_Updates #adfx