TV3 to go with Irish version of Come Dine With Me

TV3 is to bring an Irish version of the highly popular Come Dine With Me reality series to screens as a key part of its autumn schedule which has been announced. The show, which has proved a big audience puller for Channel 4, involves a group of people hosting and cooking for each other to win a cash prize of £1,000.

TV3 will broadcast 30 episodes of the show around the country and people will be able to apply to take part online. The series will be made for TV3 by ITV and will feature the voice-over commentary of British actor Dave Lamb, whose contribution is seen as one of the reasons the series has been so popular. 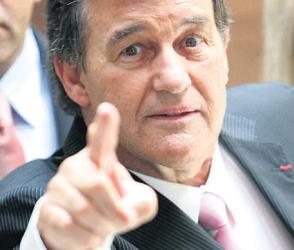 The Apprentice returns with Bill Cullen (pictured) as the one who must be obeyed, despite rumours that the businessman came close to quitting the series over the terms of a new contract. The Apprentice, You’re Fired will be presented by Anton Savage, director of The Communications Clinic, who replaces Sunday Independent journalist Brendan O’Connor, soon to return as the chat show host on RTE on Saturday nights.

Ben Frow, director of programming, TV3, said the station could make 150 hours of home-grown programmes from a budget of €20.5 million, of which €1.5m comes from the Broadcasting Authority of Ireland’s Sound & Vision fund. TV3 hopes to increase its home programming to 40 per cent, twice the official requirement. There will be a series of documentaries, including one about Irish solders who fought in World War II.

TV3 claims to be the second most popular station in Ireland, with more viewers than UTV and BBC combined. TV3 chief executive David McRedmond has ruled himself out of the running for the RTE director-general job as he wants to concentrate on achieving the goals he has set for himself at the Doughty Hanson-owned station.