UTV Ireland has signed a ten-year television content provision contract with the Broadcasting Authority of Ireland (BAI), under section 71 of the Irish Broadcasting Act.  UTV Ireland plans to start broadcasting in the Republic from next January. UTV has an agreement with ITV Studios Global Entertainment, which will give UTV the exclusive broadcasting rights for its long-running soaps Coronation Street and Emmerdale from early 2015.

John McCann, group chief executive, UTV Media plc, said he was pleased to sign the contract with the BAI and looked forward to bringing Irish viewers a new TV channel. UTV Ireland will follow the group’s existing TV formula of combining news, current affairs, entertainment and drama. Bob Collins, chairperson, BAI said the UTV signing is to be welcomed for the greater choice and increased content diversity it will offer Irish viewers.

Collins said UTV was well known to the BAI for operating several radio stations in the State. The authority wishes the company every success with its television venture in this jurisdiction. Michael Wilson, managing director, UTV Television, said plans for UTV Ireland were well underway and they would be announcing programming in the coming months. UTV Ireland will report from Cork, Galway, Waterford and Limerick. 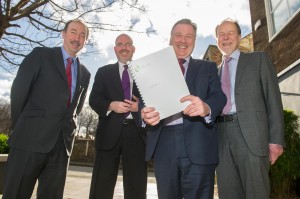