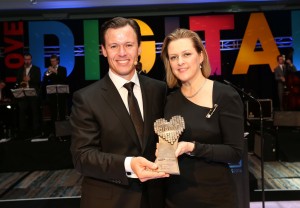 FanFootage has grown from a Dublin based tech start up, to a company whose technology is used in 16 markets countries, over three continents, with fan videos capturing over 400 performances from 147 venues. The best student award was won by Gemma Lynch for Hayley, Layla and Globalisation, an animation that tells the story about an ever changing world. Eight new award categories were added to this year’s line-up.

One of these was Digital School of the Year which was awarded to Saint Mogue’s College in Co Cavan for its entry, Education: I did it my way! Beauty, fashion and lifestyle blogger, Samantha Johnston, was named blogger of the Year for her All The Buzz post. Pictured above is Asta Lund of In the Company of Huskies agency being presented with the best design and art direction award by Today FM presenter Anton Savage.

For more on the Samsung DMA awards, visit http://www.digitalmedia.ie/