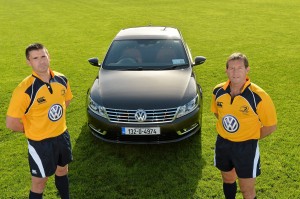 Volkswagen is to sponsor Leinster Rugby Referees (LRR) for the next three seasons. VW has supported Leinster Rugby for the past four seasons and has extended its backing to the province’s referees association. LRR is now in its 111th season. Total membership has grown to about 350, including administrative committee members, assessors and 250 active members. Association members provide officials for over 4,200 games throughout the province at all levels including youths, schools, junior and senior adult rugby.

The association also provides officials in support of the All Ireland League and has in its ranks refs who have achieved greater honours at European Competition and international level, in both the northern and southern hemispheres. Alain Rolland (above right) has refereed in three Rugby World Cups and one Rugby World Cup final and more recently Helen O’Reilly refereed the England-France women’s international in Twickenham.