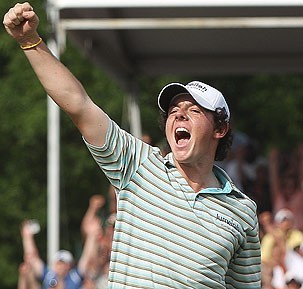 It may be hard to call the result of the independence referendum in Scotland, but there is no doubt about the popularity of the Ireland women’s rugby team. The team that beat New Zealand in the Women’s Rugby World Cup got a whopping 98 per cent of the vote in the Work.Shop.Play Heroes & Villians summer 2014 poll conducted by the Exterion Media out of home (OOH) contractor. The all-Ireland online survey of 1,650 urban consumers shows people rank sports stars’ achievements highest. Golfer Rory McIlroy (left) was in second place, followed by Ultimate Fighting Championship (UFC) pugilist Conor McGregor and Giro d’Italia which started in Belfast in July.

There are not too many surprises among the survey’s villians. Pop star Justin Bieber and hayfever each scored 98 per cent, followed by Uruguay’s Luis Suarez, whose World Cup came to an abrupt end after he bit Italy’s Giorgio Chiellini on the shoulder. Country singer Garth Brooks did not fare too well, with 83 per cent voting him the summer ‘baddie’ after the cancellation of his five concerts due to be staged in Croke Park in July. Shorts were seen as heroes by 72 per cent of men but seen as villains by 79 per cent of women. Beards were voted heroic by 54 per cent of men but nasty by 57 per cent of women.

Jamie Dornan, star of Fifty Shades of Grey, was top of the hero list for 96 per cent of women, while seen as a villain by 38 per cent of men. Antoinette O’Callaghan, marketing manager, Exterion Media, said the survey provides some fun for those on the Heroes & Villains panel. “As we settle down for the winter ahead, we wanted to capture the people, events and crazes that had us talking during the summer, from Garth Brooks to selfies on the beach, from loom bands to the weather,” O’Callaghan said. Some 65 per cent of panel members are based in the Republic and the rest from north of the border.