Ahern to run for President 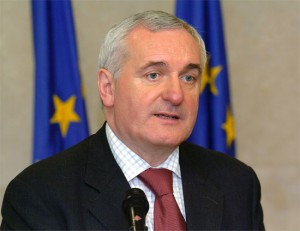 Former Taoiseach Bertie Ahern declared himself as a candidate for the presidential election in an interview on Ryan Tubridy’s show on 2fm today. With the nation trying to come to grips with the latest bank bail out – bringing the rescue package to a staggering €70 billion – the news of Ahern’s declaration may be just a step too far.

Tubridy cross-examined Ahern about his intentions. Ahern said that he was confident the people of Ireland would elect him to the Aras later this year as he was the best candidate for the job. He spoke about all the good he has done for the country and the love and affection Irish people hold for him.

There were a lot of angry callers to the show and Tubridy decided not to read out many of the comments.