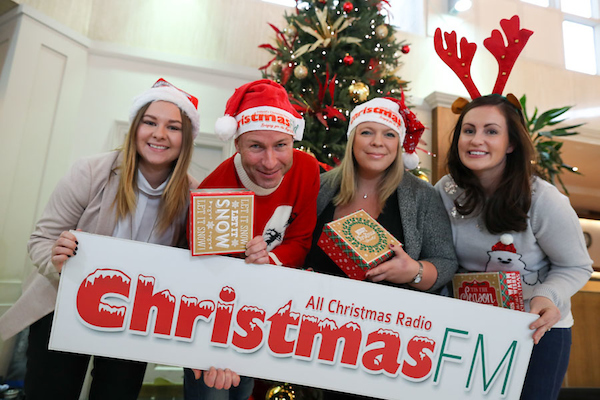 Christmas FM returns to the airwaves with An Post, Mondelez and Tesco on board as sponsors. The station will raise funds and awareness for Focus Ireland by sprinkling festive cheer across the country in the run up to Christmas. People are urged to tune in to hear familiar voices volunteer their time to bring Christmas tunes and festive updates 24/7.

They will also share Christmas memories and holiday experiences. The station will broadcast live on the radio and online at www.christmasfm.com. For the fourth year, Christmas FM will broadcast from the Ballsbridge Hotel, whose owners provide the studio space for free. Mondelez teams up with Christmas FM as part of the Cadbury ‘Cadvent Convoy’ campaign.

Kicking off this Thursday and running for 24 consecutive days, Cadbury Christmas trucks packed with festive surprises and events will arrive at different locations each day. The focus of Tesco’s campaign is the unsung heroes of Christmas, the hosts, as depicted in the company’s TV ads. Family homelessness has more than doubled in Ireland in the past year.

There is now an average of over 77 families becoming homeless in Ireland every month. During the first six months of the year more than 500 families became homeless and a third of people living in homeless accommodation are children. Every cent of every donation raised by Christmas FM for Focus Ireland goes directly to help support over 300 families.

Since 2008, Christmas FM has raised over €850,000 for charities including ISPCC, Barnardos, Simon, Age Action and Aware. Last year, Christmas FM exceeded all previous fundraising targets by raising €265,000 for the Make-A-Wish Ireland children’s charity. Christmas FM is entirely funded through sponsorship and run each year by more than 100 volunteers.

Christmas FM can be followed on Facebook at www.facebook.com/christmasfm