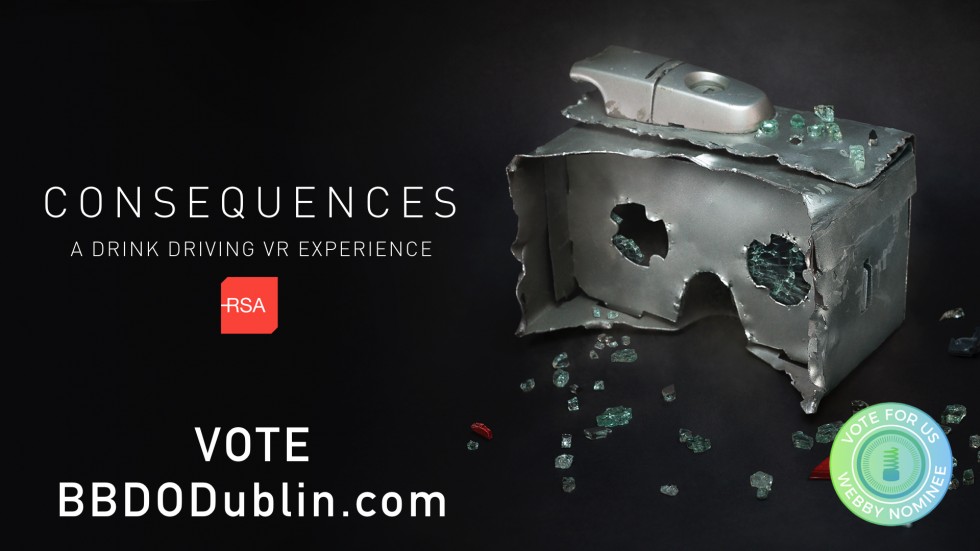 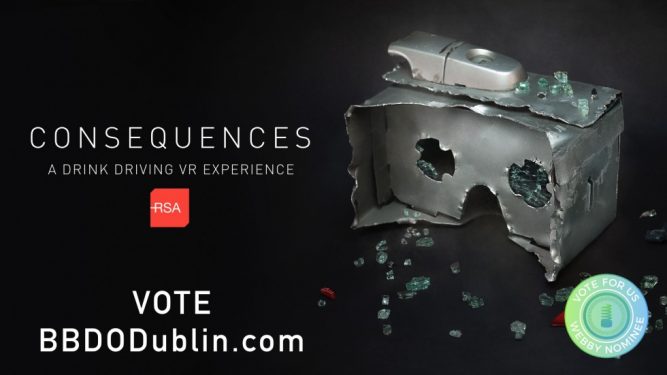 BBDO Dublin has been nominated for best branded 360-video in the 23rd annual Webby awards. Hailed as the “Internet’s highest honour” by The New York Times, the Webby awards, are presented by the International Academy of Digital Arts and Sciences. As a nominee, BBDO Dublin is also eligible to win a Webby people’s voice award from votes cast online.

Irish people can vote for the RSA campaign until April 18 at wbby.co/vote-vid60

BBDO Dublin’s ‘Consequences’ for the RSA was created in collaboration with Irish production company Assembly and VR firm Inition. It is a virtual reality (VR) project that puts the user in the shoes of a drink driver. With four storylines, participants experience the full extent of the agonising consequences of drink driving, from injury to prosecution.

Shot in 6K with 3D audio, it scored over 135,000 views and counting on the RSA Shuttle bus travelling across the country. It is regarded as Ireland’s most accessible high-end VR activation. Claire Graves, execuitve director of the Webby awards, said it was an incredible achievement for BBDO Dublin to be  among the this year’s best from 13,000 entries.

“Drink driving could change your life in an instant and our VR series brings that reality home in chilling detail,” Neal Davies, CEO, BBDO Dublin, said. “The use of new and emerging tech to spread vital road safety messages is key in changing behaviour and we’re honoured to be nominated as one of the five best branded 360-video campaigns in the world.”

Winners will be announced on April 23 and then honoured at a ceremony at Cipriani on Wall Street in New York on May 13. There they will get the chance to deliver one of the Webby’s famous five-word speeches. Past speeches include Steve Wilhite’s ‘It’s Pronounced “Jif” not ‘Gif’; Stephen Colbert’s ‘Me. Me. Me. Me. Me’ and Björk ‘s ‘A E I O U’.