Brian Lenihan accused of causing most damage to Ireland

Former Minister for Finance Brian Lenihan caused more damage to Ireland than any other politician in the entire history of the State aside from terrorists, writer and journalist Bruce Arnold told a talk at the Dalkey Book Festival. The panel discussion, entitled ‘Fianna Freefall’, also included broadcaster and newspaper columnist Vincent Browne and was chaired by festival organiser and broadcaster David McWilliams. 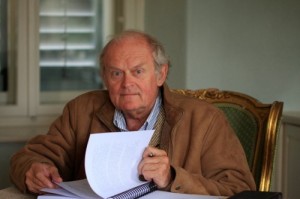 Arnold, who was one of the journalists whose phone was tapped by Charles Haughey’s justice minister Seán Doherty, said Fianna Fáil ruined this country and they did it “deliberately”. He said that the break occurred after Jack Lynch was ousted by Haughey and a corporate mentality fed by FF took hold. The new order is exemplified by the Croke Park Agreement. But this is all irrelevant now as real power is in Brussels and it will increase.

Arnold was also highly critical of former Taoiseach and Fine Gael leader Garret FitzGerald for guiding Ireland into the euro and “corrupting” public thinking by writing articles in The Irish Times about the dangers Britain posed. “The euro is arguably the biggest mistake in the history of Ireland,” Arnold added.

Vincent Browne said politics is not about power but about changing people’s minds. Slavery was thought to be the natural way of the world for most of human history, but then things changed profoundly. Browne said ideology is framed by three things, education, religion and the media – and politics only plays a minor role.

Whether or not Ireland is now witnessing the demise of Fianna Fáil is irrelevant, all major political parties – FF, Fine Gael and Labour – are the same and that has been the reality since the 1950s. The main difference between a FF person and a FG person is that “the Fianna Fáil person is not Fine Gael”, Browne said.

“Jack Lynch is a contender for the worst Taoiseach ever,” he added. “Leading up to the Arms Crisis, Lynch allowed a situation of chaos to develop. He then rescued himself by using the Arms Crisis in his favour. With his government of 1977-’79, Lynch created a debt the size of which was to cripple the country.”

Browne said the emphasis in Irish politics has never been about equality in society. He would advocate that no one could earn more than five times more than anyone else. “As well as a minimum wage there should be a maximum wage,” Browne said. ” The disparity in income flows into other areas (of society), with preferential healthcare, education and control of the media. There needs to be greater respect and status.”

Arnold said the biggest problem now facing Fianna Fáil is their leader, Micheál Martin, as the man is closely associated with the party’s previous hierarchies. Mary Hanafin was not up to the job and the best candidate available is Eamon O Cuiv. To rescue the party, it must be broken up and reconstructed along traditional lines. They must discard the more recent FF practice of targeting “packages of people” and get back to their roots.

Arnold’s next book, The End of the Party, is about the history of FF going back over the last 50 years.