Keenan dismayed by lack of progress in Middle East conflict 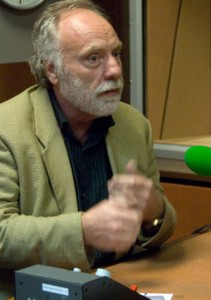 Writer Brian Keenan has expressed his disappointment at the lack of progress in moves to try and resolve the Middle East conflict and said the problem was more than “pernicious little land grabs” by Israel. The US was paying out millions of dollars in support and is using a culture of victimhood to pursue its own interests.

Speaking at the Dalkey Book Festival, Keenan, who was kidnapped by Islamic Jihad in 1986 and held hostage in Beirut for over four years, said people admire Barack Obama for his language but the US president needs to use some straight talking so that the same old rhetoric is not being rolled out in another 50 years time.

The Arab Spring must be supported by the West. Asked by broadcaster Olivia O’Leary as to who can be the honest broker in the Middle East, if not the US, Keenan said he did not have an answer to that but he believes the people in the region should be allowed evolve and find their own democracy.

Irish Independent columnist Kevin Myers denied that Israel was a client state of the US. Myers said the conflict in the Middle East and neighbouring countries was “immensely complex”. The British did horrendous things to beat down the Arab uprising in 1948 but nothing could be done about that now, it’s history.

Afghanistan was not a personal vendetta by the US to execute Osama bin Laden, it was about freeing up the country from the Taliban. Myers had it on good authority that the American forces there are exhausted by their work in Helman Province. He was convinced the Western allies will concede defeat.

Myers said he did not approve of the Israeli settlements. “I don’t believe they have a Biblical right to be there,” he said, “I’m not a Zionist”. But he said that he was deeply pessimistic about the situation in the Middle East and any hopes of resolving the conflict – the situation was “profoundly depressing” and likely to worsen.

Myers said the royal family in Saudi Arabia was “an intolerable regime”. Bloomberg news anchor and Iranian journalist Maryam Nemazee said the Saudis use the biggest carrots and the largest sticks to keep their people under control. It is all about oil prices. Nemazee said it was impossible to say when the regime might fall.