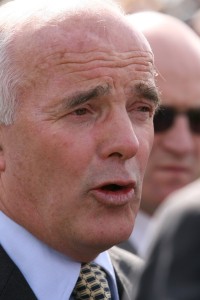 Sports stars should not produce autobiographies early in their careers as they have little to say and what appears in print is insignificant and insulting to readers’ intelligence, a discussion on the best sports books of all time heard. Speaking at the Dalkey Book Festival, horse trainer and broadcaster Ted Walsh (pictured) said anyone writing an autobiography in their thirties or forties was only doing it for “the few bob” or as an ego trip.

Sunday Independent journalist Declan Lynch, who ghosted the John Giles best-seller, A Football Man, said Giles, 70, has enjoyed a full and interesting football career. “He’s like a German,” Lynch said, “very logical, he has a great memory and never waffles. He’s got a great sense of humour, he just doesn’t show it.” A Liverpool fan, Lynch told RTE sports presenter Des Cahill he “wouldn’t know how to write a Steve Gerrard book.”

In writing the Giles book, Lynch said he went into ‘a cave’ for three to four months and for 50 days and 50 nights he set a target of 3,000 words a day. Former rugby international Hugo MacNeil said although he was a Manchester United fan he was surprised and really disappointed at the way Sir Alex Ferguson “savaged” his former assistant manager and one-time Man Utd and England striker Brian Kidd in his book.

Former world snooker champion Ken Doherty said writing autobiographies was not all about ego, it’s also about telling a story. He saluted former cyclist Paul Kimmage for his “tremendous” work in documenting the use of drugs on the sport’s professional circuit. Asked by Cahill to name his favourite sports autobiography, Doherty said it was Muhammad Ali’s The Greatest, co-authored by Richard Durham.

“You have to be honest in writing a book, but it’s hard when you’re still playing,” Doherty said. Lynch said he is waiting for the day when former footballer Alan Shearer finishes a Match of the Day by saying something of substance. Walsh said every sport has its secrets and horse racing is no exception. His dream came true with his son, Ruby’s achievements on the track. “It’s proof,” Walsh joked, “good things happen to bad people!”