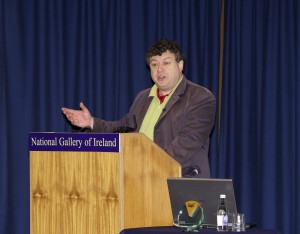 Rory Sutherland, vice chairman, Ogilvy London and president of the Institute of Advertising Practitioners (IPA), talking at a seminar in the National Gallery at which the ninth IAPI Adfx awards were launched by IAPI vice president, Carolyn Odgers of Chemistry. Sutherland spoke about behavioural economics and advertising.

Adfx was introduced by IAPI in 1996. The idea is based on proven impact on consumer behaviour and attitudes and promotes advertising as an effective and efficient marketing tool. The criteria relates to a strategic idea, a strong creative execution and the link between the two and how these points were implemented in the plan.

2008 was a record-breaking year for Adfx with 68 entries and this year IAPI hopes to better that. Entrants are advised that when making a submission they treat it like a new business pitch and that the brief is followed in line with the entry guide. Crucial too is how an entry is written, how the story is told and the data provided.

Odgers said that Adfx entries are treated as confidential and the awards depend on clients allowing cases to be written in detail. Entry is open to all IAPI members and advertisers, whose campaigns are created by IAPI member agencies that have run from the end of June 2008 to the end of March this year.

The closing date for entries is Thursday, August 12th.

This year, a pre-registration system is in place. Submissions are by way of a  written case study. Entries must adhere to the template with a word count of 3,000 and must be uploaded as pdfs. An entry guide is available to download from the Adfx website and clearly explains the set template.

Judging will be in two rounds with a shortlist in September. The Adfx gala evening at which a special guest will preside will be in the Shelbourne hotel on October 14. Tickets will be available online from July. Special guest at Adfx 2008 was British writer and one-time ad man, Sir Salman Rushdie.