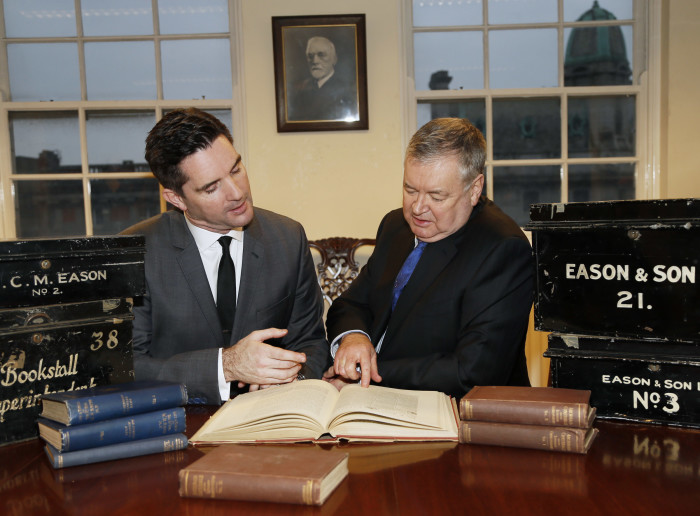 To commemorate the 1916 Easter Rising, Eason is rolling out an interactive digital archive showcasing Eason company documents from a century ago. Taken directly from the archives of the O’Connell Street store, the original documents, particularly the letters of Charles Eason, provide a perspective on the commercial life of Dublin during the time of the Rising.

The archive, meticulously maintained down through the years, includes an account of how Eason was affected by the events of Easter 1916. From the efforts made to keep the supply of newspapers to outlets around the city at the outbreak of the Rising, through to the incursion by volunteers into the shop premises and concern for the welfare of staff.

Brendan Corbett with RTE presenter Joe Duffy, author of The Children of the Rising

The Eason shops on Middle Abbey Street and Sackville Street (later renamed O’Connell Street) were destroyed within a week of the rebellion starting. The archive materials are complemented with an Easter 1916 timeline that recounts the events before, during and after the Rising and with a gallery of over 30 images from the historic days.

The archive is open to the public in the Eason store on O’Connell Street, through touch-screens on the ground floor. The screens are part of a new ‘Commemorating 1916’ section featuring a large range of 1916 books. The collection of publications represents many aspects and facets of the Easter Rising, Brendan Corbett, group head of marketing, Eason, said.