BWG Foods has chosen Rehab as its Eurospar charity of the year for the second year in a row. Last year, the sponsorship resulted in €60,000 being raised for the charity. Among the fundraising efforts planned for this year is a bottled water promotion which sees ten cents from in-store sale going to Rehab. 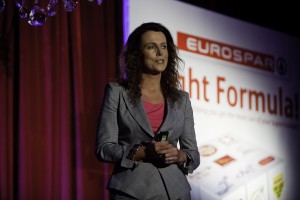 Counter coin boxes will be on display in all 56 stores. Eurospar will support the 1 Day for Rehab national fundraiser on June 15 as well as local People of the Year awards. BWG marketing and communications director Suzanne Weldon (above) said they hoped to raise over €100,000 for Rehab this year.

Weldon was joint winner of the Marketing.ie Marketer of the Year in 2003 for her Special Olympics work.