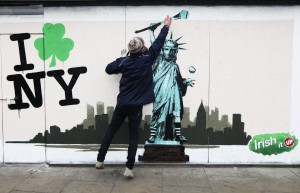 Over 120,000 overseas visitors will spend at least €50m during the St Patrick’s Festival, the Dublin Chamber of Commerce says. Over 800,000 people are due to take part in this year’s festivities, which run until next Monday. Dublin Chamber chief executive Gina Quin says the festival is the capital’s flagship annual event and it looks like this year could be the biggest one yet, with the expected increase in overseas visitors for The Gathering.

The tourism sector has endured several difficult years and events like St Patrick’s Day are of great importance and benefit to the economy. An upward trend in overseas visitors has gathered momentum recently with the latest CSO figures for November 2012 to January 2013 showing the total number of trips to Ireland increasing to 1,248,300 – an overall increase of 52,900 compared to the same period 12 months earlier.

Quin says it shows the importance of the reduced rate of VAT for tourism services.  The Government decision to extend the lower rate of VAT at nine per cent was crucial for tourism and a commitment must be made to extend the application of the rate into 2014. One third of all hotel bednights are booked a year in advance, so providing a level of certainty on the VAT rate will allow the tourism industry to market this competitive advantage.

The Coronas and comics Bernard O’Shea and Eric Lawlor are part of a Paddy’s Day VIP gig sponsored by 7Up Free at The Village on Wexford Street on March 16. Free tickets for the gig can be won by entering an ‘Irish It Up’ competition at 7Up.ie. Pictured above is a graffiti artist with his Statue of Liberty creation on Camden Street.