QR code cracks it for Boys and Girls 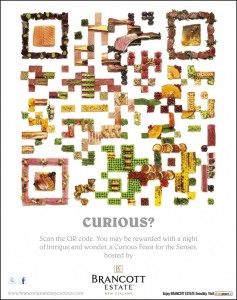 A quirky use of a QR code has won Boys and Girls the NNI Press Ad of the Month for March. The ad, aptly titled Curious?, was for Irish Distillers Pernod Ricard’s Brancott Estate Australian wine. Rory Hamilton was creative director, Anne Fleming copywriter and Bairbre McGlade handled the ad’s art direction.

Media planning was by Vizeum’s Joanna Gorczak. Judges Cathal O’Flaherty of Javelin and Maxine Hands of ZenithOptimedia said they chose Curious? as it was a “nice, fun idea, well executed” and because they liked the use of a QR code. Agencies have until May 10 to send in their press ads for April.