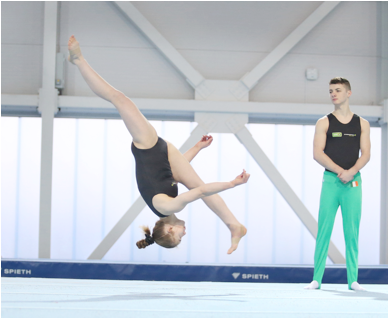 Gymnastics Ireland has agreed a three-year sponsorship with Nestlé Cereals. The deal will help support the sports body’s development programme which caters for all ages and levels of abilities. European medallist Rhys McClenaghan and national junior gymnast Meg Ryan were on hand at the National Indoor Arena in Blanchardstown for the announcement.

No details on the value of the deal were disclosed.

Gymnastics Ireland CEO Ciaran Gallagher described it as a landmark deal which shows the ambition his organisation has to grow the sport throughout the country. “We believe that this investment will enable the further development of the sport,” he said.” We see gymnastics as having a key role to play in the athletic development of young Irish people.”

News of the Nestlé deal comes only days after USA Gymnastics team doctor Larry Nassar was found guilty on 10 counts of first-degree criminal sexual conduct. Dr Nassar committed the crimes under the guise of giving young girls medical treatment. Following testimonies given by 156 women, the judge sentenced him to a term of up to 175 years in jail.