The Institute of Advertising Practitioners in Ireland (IAPI) may be willing to pay their new chief executive officer an annual salary of €120,000 or more, provided a high-calibre candidate with the right credentials for the job can be found. The institute has run ads in national newspapers in recent weeks outlining the tasks and the ideal candidate profile. Interested parties have until next Thursday, December 15, to apply for the post.

Specific tasks which the new CEO must address include membership development, advocacy, network development in Ireland and overseas, regulatory relationships, communications/media management, change management, revenue growth and financial control. Despite the economic downturn’s impact on advertising, IAPI has extensive funds in its coffers following the sale of its AdSpend monitoring service to ACNielsen.

While there is considerable speculation in adland as to who might be best qualified to replace outgoing CEO Sean McCrave, it is widely acknowledged that as advertising continues to face increasing pressure from government and various interest groups, particularly in relation to calls for restrictions on advertising alcohol and sugary drinks and foods, the new chief executive will need to have advocacy skills and be proactive. 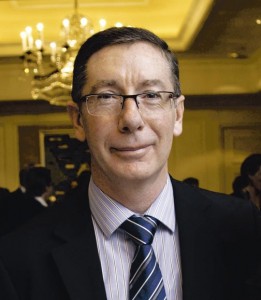 Among those mentioned as possible candidates for the IAPI post are Peter McPartlin, strategic director, Carat Ireland; Orlaith Blaney, chief executive, McCann Erickson; Paul Farrell, who now heads up IPG Mediabrands, Interpublic’s media network in Ireland and Geraldine O’Leary, commercial director, RTE Television. But as to whether one or more of these executives is interested in applying for the job is not yet known.