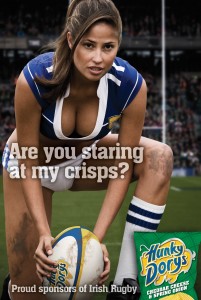 The Irish Rugby Football Union (IRFU) has made contact through its solicitors with Largo Foods, makers of Hunky Dorys crisps, and asked that they immediately withdraw the current ad campaign, the strap line for which claims Hunky Dorys to be ‘proud sponsors of Irish rugby’.

Padraig Power, commercial and marketing director, IRFU, said the Hunky Dory campaign is in “very bad taste and one which the IRFU would not want to be associated with in any way”. Power said it was blatant exploitation of women, tasteless and base.

Power said the ad was “unacceptable”. Irish rugby had a strong family focus and would not tolerate any connection with such an approach. The claim that the product is a ‘proud sponsor of Irish rugby’ implies that the brand is a significant sponsor of the game in this country.

“This is absolutely untrue and a cynical ploy in an attempt to capitalise on the games popularity,” Power added. “By doing so it has the potential to undermine the legitimate claims of the many genuine sponsors and supporters of Irish rugby.”

As well as pursuing the campaign’s withdrawal through legal means the IRFU is also writing to the Advertising Standards Authority (ASAI). Power said the hope was that Largo Foods will immediately withdraw the ad.

The ad, which uses images sourced from the US, was booked to run on posters from this week. Hunky Dorys sponsored the WBA world championship fight between Bernard Dunne and Ricardo Cordoba last year.

Ray Coyle, chief executive,  Largo Foods, said the reference to ‘proud sponsors of Irish rugby’ relates to his company’s support for the Navan rugby team. He was surprised that people regarded the ads as sexist.