Carat is to handle media buying and planning for Irish Water. It is understood Mindshare and Starcom were also invited to pitch. The new body, an independent division of Bord Gáis, has also seen creative presentations. Among the agencies involved are DDFH&B, Irish International, Javelin and Publicis. There was speculation in adland this week that Publicis has been appointed, but there has been no official confirmation.

Una Herlihy of Open Communications, the pitch doctor managing the review process for Irish Water, declined to comment. Herlihy said a formal announcement by her client is expected in the coming weeks.

A decision on Aer Lingus media is expected next week. The pitch list includes three of the country’s biggest networks – Aegis, Group M and Core Media – in the shape of Carat, Mindshare and the airline’s incumbent, Clear Blue Water. The Aer Lingus creative account, which Irish International handles, is not up for review. Irish International won the creative in July 2011 after a contest with Cawley NeaTBWA, DDFH&B and Publicis. 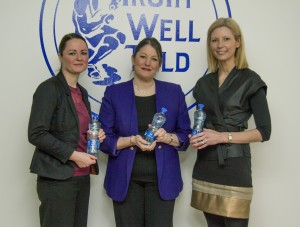 McCann Dublin has won Deep RiverRock creative. The Coca-Cola water brand was previously with Ogilvy. Details on the other agencies that pitched for the business were not disclosed. McCann handled the Coke drinks portfolio, including Coke, Diet Coke, Fanta and Sprite, in Ireland for many years. The agency’s CEO Orlaith Blaney (centre) is pictured with Nuala Anne Murphy and Alina Ui Chaolla, Coca-Cola Bottlers.