Well-known former advertising agency executive and college lecturer Michael Hayes has died after a series of illnesses. He started his career with the Southern Star in Skibbereen, Co Cork, before joining Clery’s. He moved to the agency side to become a space buyer in Arks’ media department in 1956. A year later, Arks helped launch Bolands Biscuits with the then famous ‘Change Over to Bolands’ press ads.

Hayes was chairman of the Advertising Press (AP) Club of Ireland in 1968. He chaired the Publicity Club in 1987 and the same year received the McConnell Award for services to the industry. He was heavily involved in The Advertising Benevolent Society (TABS) and the Institute of Advertising Practitioners in Ireland (IAPI).

As a result of his close ties with the advertising industry, particularly his work for TABS and the Publicity Club, he had many longtime friends in the business, including former RTE assistant director general Bob Gahan, Billy King, Bill McHugh, Eddie O’Mahony, Frank McGouran and the late Jim Nolan and Frank Fitzpatrick.

He was a member of the Marketing Institute and the Marketing Society. He was on the first judging panel of Marketing magazine’s Advertising Agency of Year in 1991. His tireless work in education began at the Carlow Regional Technical College in 1973 when he became the college’s first lecturer in marketing. 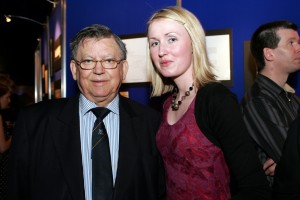 Michael Hayes with Michelle Morrisroe, National Newspapers of Ireland, at the NNI awards

His love of the Irish language was reflected in him becoming a founder member of Ciorcal Fograiochta in 1969, along with Brian Murphy, Sean O Loinsigh and his Arks colleague, Pat Ferguson. The group later became known as Ciorcal Cumarsáide. Arks created Guinness ‘Island’ in 1977 and its famous line Tá siad at teacht.

The commercial was voted Ad of the Century by Marketing readers in 1999.

Hayes directed advertising studies at the College of Commerce in Rathmines from 1978 and later at DIT Aungier Street. Despite many health battles in recent years, he regularly attended industry events. DIT dean Paul O’Sullivan paid tribute to him at the recent students presentation and mentioned he was very unwell.

He was buried in Fingal Cemetery after a requiem mass at the Church of Our Mother of Divine Grace in Raheny in north Dublin today. He is survived by his wife Ken, his sons Michael, Oliver and Finbarr and daughters Patricia, Siobhán, Dearbhla and Aisling. Any desired donations may be made to the Mater Hospital.