Leinster books in at Conrad

Conrad Dublin has announced a three-year sponsorship deal with Leinster Rugby. The five-star hotel on Dublin’s Earlsfort Terrace is now the Heineken Cup winners’ official hotel. It will be the venue of choice for Leinster Rugby meetings and events. Ads for the hotel will run at both Leinster’s homeground at the RDS arena in Ballsbridge and at the 51,700 capacity Aviva Stadium for the bigger crowd-pulling games. 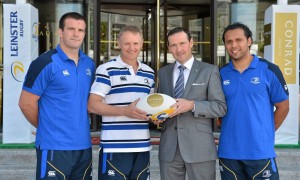