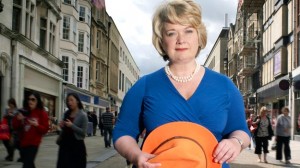 British newspaper columnist and businesswoman Mrs Moneypenny is the guest speaker at the Marketing Society Christmas lunch. A writer with the FT, Mrs Moneypenny runs a business in London, outsources her children to various schools and has been married to a golf-obsessed Australian for over 20 years.

She has starred in Channel 4’s SuperScrimpers consumer show, giving tips on how to save money.

A former stockbroker and investment banker, she admits to having acquired a large mortgage, several academic degrees of varying uselessness, a passion for shooting birds and a private pilot’s licence.

The lunch is in the Shelbourne on Friday, December 14 and coincides with the Research Excellence Awards.

Early bird rates apply until November 29 and a special rate for solo consultants is available on request.

To read more about Mrs Moneypenny, click on http://www.mrsmoneypenny.com/