The People Group (TPG) claims to be Ireland’s first sales and marketing recruitment agency to launch a website allowing candidates apply for jobs by smart phone. TPG worked with Evolution-e Internet to create a mobile site to react to demand for smartphone web browsing. Smart phone users access the site by googling sales and marketing placement agencies on their phone or by clicking on www.thepeoplegroup.mobi

TPG managing director Colm Buckley said they decided to launch a .mobi web site to reflect the fact that over half of Ireland’s five million mobile phone users are able to access the web, with about 600,000 doing so regularly. TPG began monitoring its web traffic six months ago and found that about 15 per cent was coming through mobile phone devices such as iPhones and android phones. 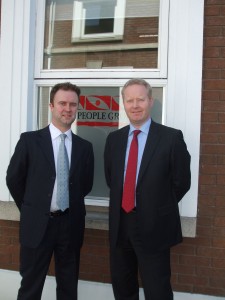 Stephen Quinn, Evolution-e Internet and Colm Buckley, The People Group, at the launch of Ireland’s first .mobi website for accessing job vacancies in sales and marketing by smartphone